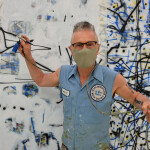 ‘this period of lockdown as a result of the covid19 pandemic has been a period of work and love – and solitude, and reflection through work and love. the place for making art for me has always been both a physical and mental space. the studio as physical space for performance, the activity enabling me to work out all the issues and concerns i might have with the external world. so, for me this period of ‘lockdown’ has been a kind of retreat, an intense period of reflection and action in order to keep in good mental and spiritual health’ – andré stitt

HYMNS TO THE SILENCE SERIES

the artist has produced a series of small unframed studies which are offered for sale at special offer see gallery TEN web site www.gallery-ten.co.uk

all money from sales of the ‘hymns to the silence’ series will be put towards supporting the practice of a welsh or wales-based artist/s affected by the current pandemic. 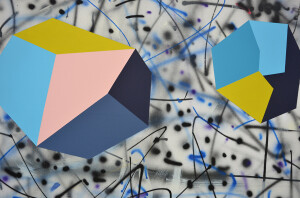 When you’re in your studio, you don’t have to be a finished product all the time or make formal pronouncements. Work and love – the two best things – flourish in studios. It’s when you have to go outside and define everything that they often disappear. So, this period of lockdown as a result of the Covid-9 pandemic has been a period of work and love – and solitude, and reflection through work and love.   The place for making art for me has always been both a physical and mental space. The studio as physical space for performance, the activity enabling me to work out all the issues and concerns I might have with the external world. So, for me this period of ‘lockdown’ has been a kind of retreat, an intense period of reflection and action in order to keep in good mental and spiritual health.

Although I make paintings that are intentionally based on abstraction, and as a deliberate provocation to figuration, my work has always been anchored in social, political and quotidian experiences of reality. It depends on what form that reality takes of course. I have always been acutely aware of our human construction and conceptual organisation of this reality, for myself this has always been rather abstract, ambiguous and contradictory. 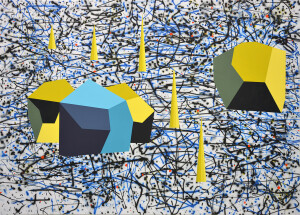 So, here’s what happened just before ‘lockdown’: over the previous year I visited eight new towns throughout the UK and carried out a series of performance walks or ‘drifts’. The walks took place throughout town centres, housing estates, along pedestrian and cycle paths,  through underpasses, and upon streets and pavements.

In each location I pulled an etching plate attached to a piece of string behind me as I walked. This created an image of surfaces that would later be used for making a print. I also captured fragments of these walks on an iphone which was later edited into a film.

The simultaneous perception of different spatial locations that emerged through the process offered a simple and direct communication with the physical environment. The performed activity of walking allowed multiple inscriptions to be etched into the plates.  This provided fluctuations in surfaces to be recorded and historical data to be inscribed upon the plates. In this respect I came to regard the particularity of the etching process as a direct transmitter of experience. What emerged was a continuous and layered dialogue between lived experience, memory, recall and the direct physicality of the built environment.

I would suggest that it is through the performed activity and its attendant and continuous act of etching that we might be drawn to a re-activation of memory and the spaces we have inhabited, in a future past that once held all our utopias.

I managed to produce 2 editions of these etching before ‘lockdown’; an edition of prints of ‘Cwmbran’ and another edition of Cumbernauld in Scotland. 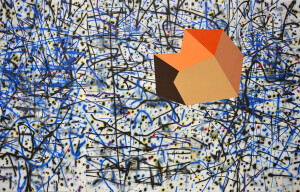 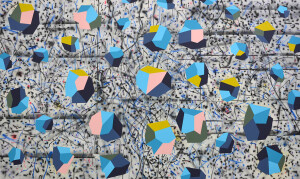 As I could not make any more prints due to ‘lockdown’ restrictions regarding  access to a print studio I proceeded to transfer the experiences of the mark making process to the studio. Having just invested in an airbrush and compressor I translated this to painting  allowing embodied actions to reveal themselves through an accumulation of mark making, employing fluid and disruptive gestures using the airbrush.  As with learning how to use any new application it took me many long and frustrating days and weeks to become technically proficient enough to get the airbrush to do what I wanted it to do. Which in my case when engaging in a new application or technique  is usually doing what you’re not supposed to do in order to achieve unexpected results.

and to have some relation to the scale (albeit on a rather humble level) of what was taking place in the world. I let the process lead me, in order that I would not know what I was looking for until I had found it through what the process revealed and therefore what the identity of the paintings were.

As the paintings progressed I would erase and build layer upon layer, then blank out and apply new marks. The traces of inscription created a palimpsest and suggest a correlation to the topography of experience of the new town etchings.  However, as the work developed they increasingly equated  more to a series of altered states, layers of interference, traces, absences and presence that go beyond the current situation of ’lockdown’ to question the validity and possible cessation of human life. I had also been reading Patricia MacCormack’s new book ‘The Ahuman Manifesto’ published just before ‘lockdown’  concerning activism at the of the Anthropocene (our current era).  MacCormack argues for a new way of thinking that doesn’t dissolve into nihilism and despair but actively embraces concepts of human extinction, deep ecology, a refusal of identity politics and the apocalypse as an optimistic beginning.

In these recent works geometric forms sit within the painted ground which acts as an interconnected and fluid landscape or environment. These forms are abstract and ambiguous, even enigmatic.  We are not sure if they are benign, what their relationship with other forms are; are they architectural, do they relate to zones of conflict or are they in some strange way transcendent. 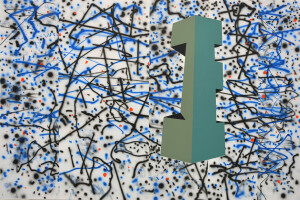 Some of the geometric forms are  based on GPS satellite imagery of security-sensitive and censored sites, some on memory and recall of modernist architectures. There are allusions to something solid but also to structure collapsing, breaking down, pandemic interference, layers of paint, surface erasures, traces and marks suggesting things in transition.

In the studio the experience of making this work during ‘lockdown’ is one of merging the past and present often haunted by other moments, and other times that might suggest perhaps a rhizome of experience that can lead to possible futures.

I do not wish to proscribe meaning, but these recent paintings suggest to me that through the process of the performed activity of painting over many weeks of isolation and solitude during ‘lockdown’ it may be possible to arrive in a new space or territory;  a place that has yet to be discovered and to go beyond our fear of the unknown. 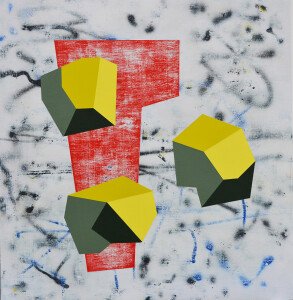 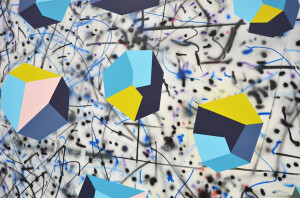